In the wake of the government’s plans to drastically alter the funding of higher education, the very ethos of the university is undergoing transformation. At stake are learning for its own merit, the validity of disciplines, the forms of life there produced and the concept of academic freedom, all under scrutiny amidst concerns of value – monetary, societal, public and private. The intention of this symposium is twofold: to defend the role of arts, humanities and social sciences in academic learning and to establish a discourse for the university as a public good beyond the well-rehearsed humanistic defences of the past and the emerging value-based discourses of the present.

1) Next steps in the USS dispute
2) Congress delegates 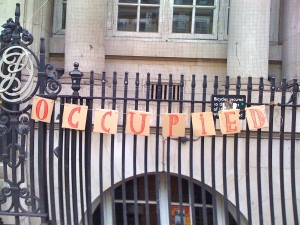 Goldsmiths students occupy management building in solidarity with the lecturers strike. Aims and demands plus press release and messages of solidarity here.

The Future of New Cross

Every resident of SE14 (and nearby) is invited to discuss and plan the future of Public services in New Cross.

Southwark and Lambeth Save our Services (SoS) and Lewisham Anti-Cuts Allilance (LACA) have called a South London regional feeder march to join with the TUC March 26th national demonstration against the cuts.

The South London regional feeder march will leave from Kennington Park at 11.00 am on Saturday March 26th and join the main demonstration in central London.

The regional march will bring together activists, protesters, union members, service users, all races, creeds and colours, all sexes and sexualities, the young, old and in between, to express the opposition South Londoners feel to the ConDem coalition cuts and the local councils that implement them. Lewisham, Lambeth and Southwark have already seen large and militant protests outside their councils, to express our outrage at the millions of pounds being slashed off services, thousands of redundancies, privatisation and outsourcing. We intend to build that movement into one large enough to not only protest against the cuts but to stop them.

Performance Against the Cuts

March For the Alternative

Government spending cuts will damage public services and put more than a million out of work. They will hit the vulnerable, damage communities and undermine much of what holds us together as a society. Ministers say there is no alternative. But both of the government’s two key decisions are political choices, not economic necessity. That is why it is the March for the Alternative – an alternative in which rich individuals and big companies have to pay all their tax, that the banks pay a Robin Hood tax and on in which we strain every sinew to create jobs and boost the sustainable economic growth that will generate the prosperity which is the only long term way to close the deficit and reduce the nation’s debt.