What happens if you throw a war, and somebody comes? ‘Multicultural Crisis’ after Breivik

Read Marx’s “Capital” at Goldsmiths: everybody is welcome (unless your name is David Willetts)

No fee (unless, sorry, you are doing this for award – and that, friends, is Willetts’ fault – though the Labour Party have a share of the blame too).

This course involves a close reading of Karl Marx’s Capital (Volume One).
The connections between cultural studies and critiques of capitalism are considered in an interdisciplinary context (cinema studies, anthropology, musicology, international relations, and philosophy) which reaches from Marx through to Film Studies, from ethnographic approaches to Heidegger, from anarchism and surrealism to German critical theory and poststructuralism/post-colonialism/post-early-for-christmas. Topics covered include: alienation, commodification, production, technology, education, subsumption, anti-imperialism, anti-war movement and complicity. Using a series of illustrative films (documentary and fiction) and key theoretical texts (read alongside the text of Capital), we examine contemporary capitalism as it shifts, changes, lurches through its very late 20th and early 21st century manifestations – we will look at how cultural studies copes with (or does not cope with) class struggle, anti-colonialism, new subjectivities, cultural politics, media, virtual and corporate worlds.
http://www.gold.ac.uk/media/CU71012A%20Cultural%20Studies%20&%20Capitalism%2
02011-12.pdf

The lectures/seminars begin on Tuesday 10th January 2011 between 5 and 7pm and will run for 10 weeks (with a week off in the middle) in the Richard Hoggart Building (RHB 309), Goldsmiths College. Students are required to bring their own copy of the Penguin, International Publishers or Progress Press editions of Karl Marx Capital Vol I. Reading about 100 pages a week. (Please don’t get tricked into buying the abridged English edition/nonsense!)

Note: The Centre for Cultual Studies at Goldsmiths took a decision to make as many as possible of its lecture series open to the public without fee. Seminars, essays, library access etc remain for sale. Still, here is a chance to explore cultural studies without getting into debt. The classes are MA level, mostly in the day – though in spring the Capital course is early tuesday evening. We usually run 10 week courses. Reading required will be announced in class, but preliminary reading suggestions can also be found by following the links. RHB means main building of Goldsmiths – Richard Hoggart Building. More info on other free events from CCS here: http://hutnyk.wordpress.com/what-is-to-be-done/

PICKET LINES FROM 8AM

JOIN UCU AND UNISON MEMBERS ON STRIKE IN DEFENCE OF PENSIONS

TEACH-OUT FROM 9AM WITH SESSIONS ON:

THE FUTURE OF THE OCCUPY MOVEMENT 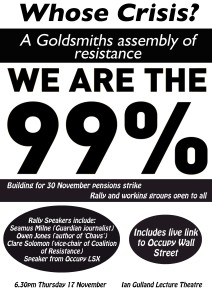 THE CRITIQUE OF POLITICAL ECONOMY IN A TIME OF CRISIS

The Assault on Universities – book launch

A discussion to launch publication of a new book, ‘The Assault on Universities: A Manifesto for Resistance’ with speakers John McDonnell MP, Andrew McGettigan (Research Fortnight) and contributors to the book. ‘The Assault on Universities: A Manifesto for Resistance’ is a new collection of essays on the challenges that face higher education today in the light of funding cuts and the ideological re-orientation of the idea of modern university. The book features several contributions by members of staff at Goldsmiths and contains a manifesto that has been signed by nearly 1000 academics and researchers.

Education under attack: why we need unions 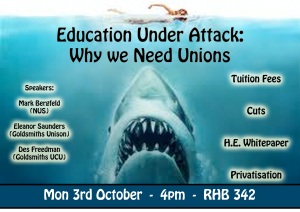 We face unprecedented cuts, tuition fee increases, privatisation and marketisation in our universities. This is a meeting organised by Goldsmiths Students Union to celebrate the importance of trade unions in challenging the deterioration of conditions that will be imposed on us if we don’t stand up to the government’s proposals.

Radical Goldsmiths
Create a free website or blog at WordPress.com.